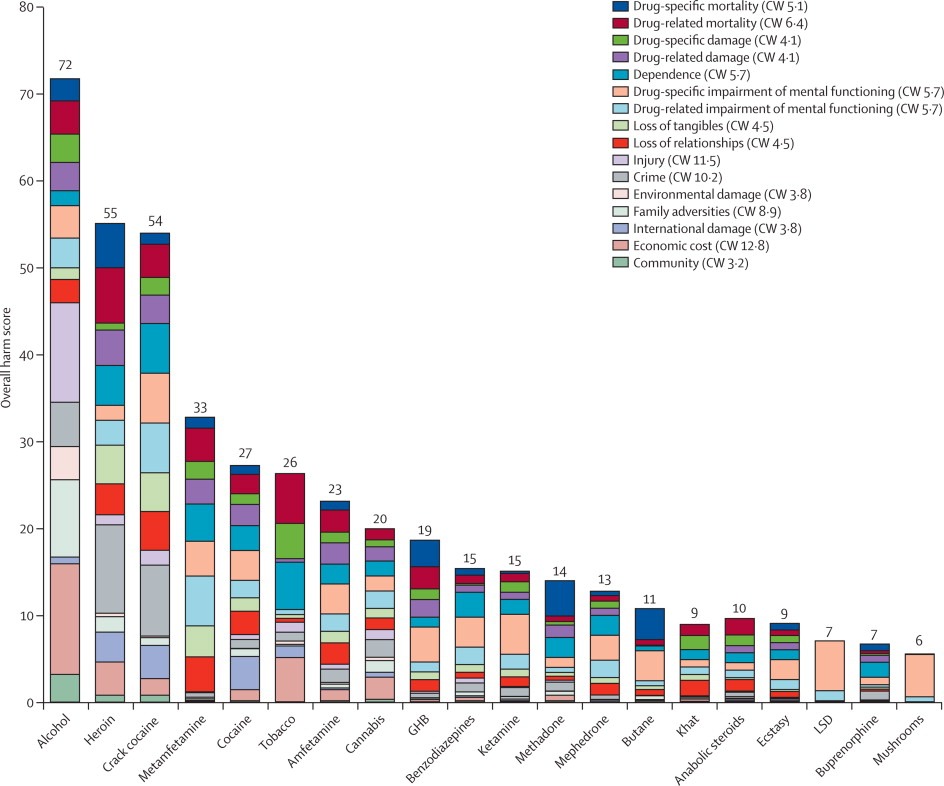 Drugs are often used to describe addictive street drugs. However, there are many different substances that fall under the nameof drugs. Some fall under drug abuse, addictive substances or medicinal drugs such as cannabis. The way in which drugs are used is, of course, the most important. Lately, especially the hallucinogens and also the psychedelics without hallucinating effect are in the spotlight when it comes to their therapeutic potential. We consider psychedelics to be a completely different sub-variety of the various types of drugs, and psychedelics are therefore the least harmful. We are talking about the least harmful and most researched ones; psilocybin from magic mushrooms and magic truffles. But also LSD and MDMA are getting more and more attention.

What do the different psychedelics have in common?

The various psychedelics are almost all known to increase activity at the serotonin receptors. This is usually done because the psychedelics are similar to serotonin and therefore fit the same receptors. With some drugs such as MDMA, activity is increased because more of the body’s own supply of serotonin is released. Overall, most effects are achieved through stimulation of the serotonin receptor 5HT2a. The degree of stimulation of the 5HT2a receptor in particular, as well as a mix of other receptors, causes a change in perception, mood and the creation of new connections in the brain. The new connections in the brain are attributed to the extra production of the neurotrophin BDNF. When the body releases more BDNF, it switches on a series of genes that grow brand new brain cells, nerve cells and number of connections. Even higher levels of BDNF mean that you learn faster, remember better, age more slowly and your brain rapidly rearranges its connections to different parts of the brain and body.

BDNF also increases the brain’s plasticity. When brain cells are damaged or put in a stressful situation, BDNF protects them and helps them to come back stronger. The neural pathways become more flexible instead of being broken down, which could explain why higher levels of BDNF are associated with warding off depression.

The Default Mode Network (DMN) includes brain areas in the cortex that are normally active during rest and is involved in remembering events, social and emotional judgements and future planning. Decreasing the activity of the DMN causes a loss of time awareness and a greater focus on the here and now. This means that worries and fears about the future disappear.

A lower activity of the DMN therefore results in a lower stress level and thus lower cortisol. Low cortisol ensures that the body can use its self-healing capacity, which allows it to fight diseases and inflammations. Reduced inflammation releases more serotonin, which in turn releases more BDNF, while also lowering anxiety and depression.

Read more about being in the now

Psychedelics in higher doses ensure that the self-concept is lowered because a higher degree of connectedness can be experienced. The ego usually wants to be fed with more and more and often unhealthy things. The ego makes us restless and anxious, since self-preservation is the ego’s greatest goal. Without ego we will not survive but an overactive ego causes separation, loneliness and addictions.

It happens regularly that during a psilocybin session emotions come up that have been blocked for a long time. It is precisely the release of this “old pain” that causes the release of emotional blockages and sometimes psychosomatic complaints. It can sometimes feel like a liberation to feel uninhibited everything that needs to be felt. Because psychedelics can also give a feeling of contentment, the “negative” emotions can often be felt more easily and processed into something that someone can be content with.

MDMA at normal doses hardly gives hallucinations while the other known psychedelics do. LSD, psilocybin and DMT (ayahuasca) are known to cause hallucinations. The hallucinations in combination with the effects described above can provide new insights that can help, spiritual experiences or a very beautiful experience that cannot be explained in words. We believe it is also a glimpse into how the subconscious works and the new knowledge can help you make healthy choices. Would you like to learn more about hallucinations? Read on via the link:

We start our routes with an intake form. After filling in the intake form, a first advice will be sent to you by mail with the advised trip and dosage. Also in the mail there is an explanation of what the approach will be and how to make an appointment for the psychedelic session.

Please check our current availability via the following link:

Would you like to know more about who we are and where we offer our services? Please use the following links for more information.

Nowadays, chatting via chat apps such as Whatsapp and Telegram is the easiest way to get in touch quickly. The phone number we use for these chat apps is 0640898455.

Although e-mailing is used less and less frequently, you can of course also contact us by e-mail. You can e-mail us at the following e-mail address.